Skip to content
We’re an affiliate: Some of the links on this page are affiliate links. We may earn a small commission on purchases made through them. Our content is not influenced by commissions.

Dual shower heads are useful for a variety of reasons. They can make showering easier for those with disabilities, they can make it practical for couples to share a shower, and they can also provide a more luxurious showering experience.

A showers function isn’t the only thing to consider though and you want to choose a finish that goes well with the style of your bathroom. Shower heads with a brushed nickel finish are great because they have a warm matte tone which goes well with most styles.

In this guide, we’ll take a look at our top picks for the best dual shower heads with a brushed nickel finish. Overall our top pick is the Moen 26009SRN which you can see below. 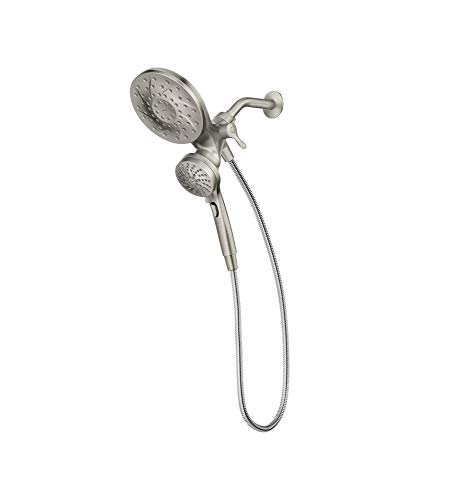 If the Moen isn’t for you, we have a few more options which we will also take a look at. After that we have a buyer’s guide and FAQ section to clear up any questions you might have.

If you’re short on time, you can take a look at the table below to compare our top recommendations. Further down the page we take a closer look at each model.

The Moen 26009SRN is our overall top pick for the best brushed nickel dual shower head offering a good balance between price and quality. As well as a brushed nickel finish, it is also available with a chrome finish.

This shower head combo includes a smaller handheld head which attaches to the magnetic base of the larger fixed head. Whilst a few users have found the magnetic attachment to be a little precarious, most users were happy with how well it holds and how it makes the handheld head super accessible.

The fixed head has just one settings, but the handheld head has 6 different settings to choose from: rinse; pause; massage; relaxing massage; soothing massage; wide coverage. You can either run one head at a time or you also have the option to run both heads simultaneously.

The Moen 26009SRN is ADA compliant which makes it a good choice as a shower head for those with disabilities.

Unfortunately, like most afordable shower heads these days, this model is mostly made from plastic. However, Moen is a reputable company and they do offer a limited lifetime warranty to put your mind at ease.

Another point worth noting is this shower heads does not include a shower arm although it will fit any standard arm. 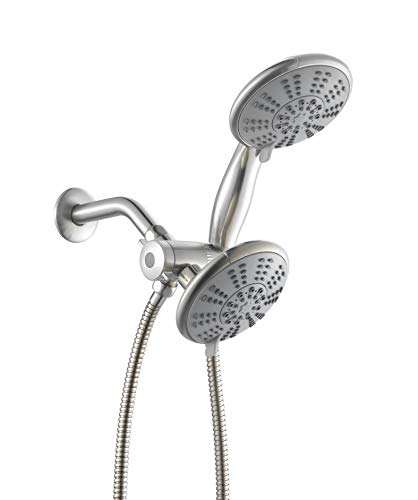 If you want to spend a little less than the Moen, the Ana Bath Anti-Clog dual shower head is worth checking out. As well as the brushed nickel finish, it’s available with a chrome or oil-rubbed bronze finish.

This shower head has a more traditional mount for the handheld which is more reliable than the magnetic mount of the Moen but not quite as convenient. With the Ana Bath, you can run the heads individually or simultaneously. Each head has 5 settings to choose from which give you a total of 25 combinations to try out when running both heads.

The anti-clog nozzles on this shower head make it a great choice for hard water. You can rub the nozzles whilst water is flowing to clear them from minerals and keep the water flowing smoothly.

Like the Moen, the Ana Bath shower head is mostly made from plastic but it’s still pretty durable. It isn’t 100% clear what the warranty is for this shower head. I couldn’t find any clear terms but their website suggests their products are covered by a limited warranty and they seem to be responsive to customers problems and issues on Amazon.

Again, like the Moen, this shower heads does not include a shower arm although it will fit any standard arm. 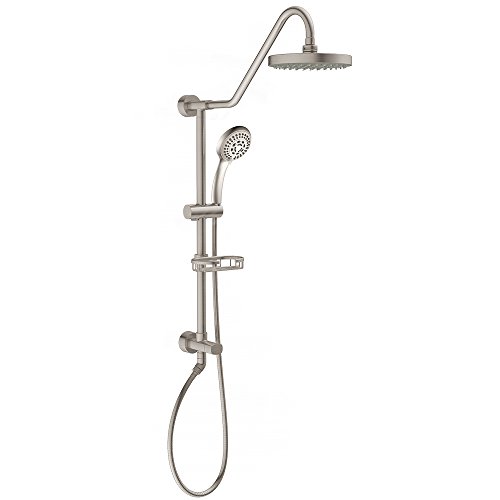 If you’re looking for a brushed nickel dual shower head with slide bar, the PULSE ShowerSpas Kauai III is a great option. A slide bar is great for people with disabilities and when people of different heights will be using the shower. This shower system is available in a few other finishes as well as brushed nickel. You can also choose between 2.5 GPM or 1.8 GPM flow rate.

You can use both heads individually or together. The 8″ rain shower head only has one setting but the handheld head has 5 settings: jet; wide; wide and jet; massage; wide and massage.

The rain shower head has rub-clean soft tips to help remove mineral build up making it a good choice for hard water.

This dual shower head is easy to install and doesn’t require any drilling. The top part installs into an existing valve and the bottom mounts to the wall via included adhesive tape.

Unlike a lot of shower heads these days, the PULSE ShowerSpas Kauai III is mostly made from metal except from some part like the handheld head.

A limited lifetime warranty is included to keep your mind at ease.

The biggest downside to this shower head is the price. The features, build quality, and warranty are great, but they do come at a cost. 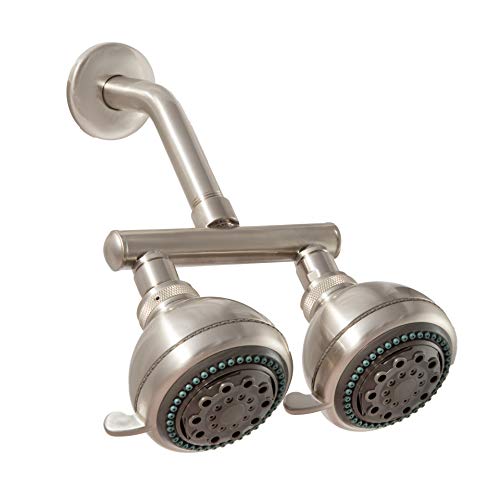 A fixed dual shower head like the First Mate Double is ideal for couples sharing a shower. Whilst you can’t use either head handheld, both shower heads are on a swivel ball joint so you can independently position each one. Each head has four settings to choose from.

Unfortunately, you can’t use one head at a time unless you purchase and install a separate valve adapter. Whilst having water run out of both heads is great when two people are sharing a shower, ideally, you want the ability to channel all the water through one head when showering alone for a higher pressure shower.

There doesn’t seem to any information regarding a warranty but this shower head does have mostly good reviews on Amazon.

This shower head doesn’t include a shower arm but it will fit on any standard arm.

Shower heads with a brushed nickel finish have a warm tone and neutral matte look that works well with most designs. The finish is durable, holds up well in hard water, and doesn’t show up finger prints or water spots.

Not a downside to brushed nickel itself, but it’s worth noting that some cheaper brushed nickel shower heads have a poor finish that doesn’t really resemble brushed nickel at all. We recommend choosing a reputable company and checking user reviews before making a purchase.

There are two types of dual shower head:

With a fixed dual shower head there are two identical shower heads side by side and fixed to the wall. The direction of each head can usually be positioned independantly but cannot be removed from the wall.

Fixed dual shower heads are great for couples sharing a shower as both heads are the same and can be easily directed to different areas of the shower..

A dual shower head with handheld comprises one shower head fixed to the wall whilst the other can be removed from it’s mount and used as a handheld shower head. Often, the fixed head is a larger, rain shower head.

This option is great for the elderly or those with mobility problems as the handheld shower head makes it easier to give a thorough clean.

Installing a dual shower head is easy and you shouldn’t require a plumber, as long as you purchase a shower head with standard fitting.

Dual shower heads are installed in the same way as a standard shower head and the video above should help you with the process. Make sure to follow the instructions supplied with the shower head you purchase though, in case there are any unique steps.

In the US, a maximum of 2.5 GPM (gallons per minute) flow rate is allowed. It is even lower in some areas such as california. Most standard shower heads operate at 2.5 GPM anyway, so a dual shower head won’t use more water than those.

So overall, the water use depends on the GPM of the shower head you buy rather than whether or not it is a dual shower head.

If you run the shower heads individually then the pressure will be the same as a single shower head. There will be a decrease in pressure when both heads are running at the same time but most people find this to not be too noticeable.

Can Both Heads Be Used at the Same Time?

Many dual shower head models allow you the option to run both heads at the same time but some only allow you to run one at a time. Make sure to check the specifications if this is a feature you want.

To wrap it up, dual shower heads can be a great way to make your showers more luxurious, or they can be useful for those who are disabled or couples wanting to share a shower. A dual shower head with brushed nickel finish is a safe option since this finish goes with most styles and holds up well.

Take a moment to decide which features are important to you and how you will use the dual shower head. For example, couples wanting to shower together would do well with a fixed head wheras someone with disabilites might prefer our top pick, the Moen 26009SRN due to it’s ADA compliance.

We are a participant in the Amazon Services LLC Associates Program, an affiliate advertising program designed to provide a means for us to earn fees by linking to Amazon.com and affiliated sites.

This website contains affiliate links. We may earn a small commission on purchases made through them.

This website uses cookies to improve your experience while you navigate through the website. Out of these, the cookies that are categorized as necessary are stored on your browser as they are essential for the working of basic functionalities of the website. We also use third-party cookies that help us analyze and understand how you use this website. These cookies will be stored in your browser only with your consent. You also have the option to opt-out of these cookies. But opting out of some of these cookies may affect your browsing experience.
Necessary Always Enabled

Any cookies that may not be particularly necessary for the website to function and is used specifically to collect user personal data via analytics, ads, other embedded contents are termed as non-necessary cookies. It is mandatory to procure user consent prior to running these cookies on your website.